Free Shipping in Canada on orders over $35 - Possible Shipping Delays 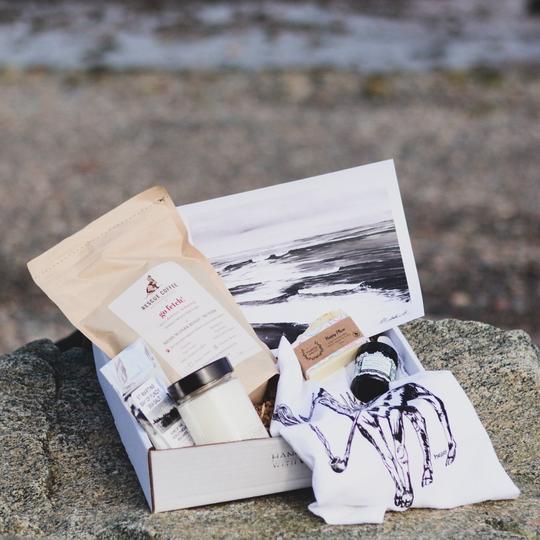 Like kids everywhere, I couldn’t wait to leave home. I was packed for a full year before I moved away, eager to leave behind the small New Brunswick town I grew up in and see “the world”, find success elsewhere. I left for university as a young woman, moved to a larger city and established a career. I traveled to Europe, saw a bit of the world and started a family. At that moment, “home” started pulling me back. There were several iterations of what that could look like. First it was weekend visits to my parents’ home. Then, it was the idea of maybe purchasing a summer home or a cottage. Finally, three children and two careers later, an opportunity arose that allowed us to move back to Sackville, New Brunswick, a university town of 5,000 people in the South Eastern corner of the province.

Having lived for over a decade in Halifax, I was used to the love and lore of Nova Scotia. Nova Scotia is celebrated and has a strong folklore. There are songs written about it (I have yet to hear a lamented “Farewell to New Brunswick”). I was inundated with “you’re moving to NEW BRUNSWICK?!” with disdain by many of my colleagues and friends. It was a bittersweet goodbye. I’m not sure what they imagined, but I presumed they were imagining a place devoid of culture, of ideas, of people. Just moose. And trees.

And certainly our move was full of trepidation. I was leaving behind an entire community that I loved, friends I would miss terribly, a successful business I had built from the ground up, all to move to a tiny town in New Brunswick.

To be honest, there was a time I thought those voices might be right. I had enjoyed significant business success in Halifax, I had built a name and a reputation there. I was moving from the largest regional economic centre and trying to build Anointment on a national scale in a tiny town. Could it be done? Could *I* do it, while raising three children? I wasn’t sure.

Seven years later, I know it CAN be done from here. I see a re-awakening in celebrating what we have. We have unparalleled natural beauty. We have communities that come together in times of crisis. We have entrepreneurs who are taking on the world. We have a way of life to celebrate and be grateful for, and we have a culture of modesty that generally looks like “we have enough.”

Earlier this year I was introduced to Ingrid Elyse, a writer and mother of young children from Saint John, NB. She had begun a weekly column called Ms. New Brunswick, which I thought was immediately brilliant. Having grown up in the 1980s, I recall clearly teenaged girls vying for Miss Marshland Frolics here in Sackville, or Miss Dorchester. I remember the swimsuit modeling, the talent portion, the prom dress. And I’m thankful those days are gone. I’m so impressed that Ingrid has reclaimed that title for women to be celebrated for their achievements and not how they look in a two piece bathing suit (which I’m betting would also be AWESOME because women are beautiful and amazing). Ingrid kindly interviewed me for the Ms. New Brunswick series and I was shocked at how much came out of me – over a decade of business experience, of learning, making mistakes, feeling the fear, picking myself back up again and forging forward. It was a moment I realized that I knew something, that I had accumulated knowledge I didn’t even take the time to acknowledge I had. I am grateful for that. The feedback on the article was amazing and the energy has buoyed me forward.

Ingrid also has felt inspired by the women she interviewed and now, while expecting a baby, she has launched her own business, the NB Box. An opportunity to celebrate the product of some of the women entrepreneurs of New Brunswick. A gift to send to those for whom the pull “home” has begun but they have not negotiated their lives into place yet (it took me six full years). A way to support individuals who want to be successful on their own terms. And so the NB Box was born.

Anointment’s signature Soothing Skin Ointment is included among the gorgeous offerings of this box, we are thrilled to be part of it and hope that you will support the growing culture of entrepreneurship flourishing along with the wild roses and goldenrod in the meadows of this beautiful province right now! #nbproud

Receive emails from Anointment including news, promotions, and the inside scoop.

Enjoy 10% off your first order when you sign up.*

You can unsubscribe at any time. 10% off offer valid for new customers only. Can not be used in conjunction with any other offers, on wholesale accounts or towards the purchase of Anointment gift certificates.